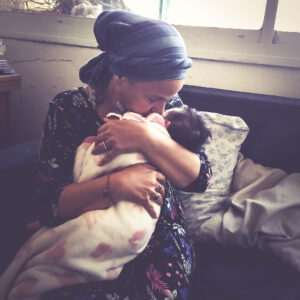 When You’re Drenched in Tears
By Chaya Ben-Baruch

When our pediatric cardiologist met with us for the first time in February 1992, at Legacy Emanuel Medical Center in Portland, OR, the lollipop in his mouth seemed to be a good sign. His team performed an ultrasound on our newborn child’s heart, as I acrobatically nursed him in order to keep him calm. But then, the verdict we had feared: open-heart surgery.

Holding Avichai in my arms on that fateful day three decades ago I recall the doctors’ decision to schedule open-heart surgery — a not-uncommon procedure for Downs toddlers. I wept, my tears falling on my baby.

While medical technology has improved exponentially since then, at the time, the local hospital in Fairbanks could not perform the complex procedure, which required me to travel alone with Avichai – but without family or support, to Portland Oregon, where the operation would be performed.

When our pediatric cardiologist met with us for the first time, the lollipop in his mouth seemed to be a good omen. While his team performed an ultrasound on our newborn child’s heart, I somewhat acrobatically nursed him to keep him calm.

When I asked the doctors to play some recorded music during surgery, they replied that there was no stereo system in the operating room, so I proudly whipped out a walkman and earphones. I asked the anesthesiologist to talk to Avichai before the surgery so he would recognize his voice.

I’d been told that surgery done with biologically similar blood had a better recovery rate, so I asked to have blood I had already donated and which was awaiting the procedure in Fairbanks to be ferried to Portland.

In the middle of the night, I asked our “lollipop doc” about “What happens if…, and if you can use a Down Syndrome child’s body part to help others. And I drenched my baby in my tears…

Waiting to be called for surgery, I saw other parents anxiously waiting, whose children were also in line for surgical procedures that morning. The tension was palpable among all of the parents.  I saw kids who “merely” needed tubes in their ears and wished I was in their parents’ place. When I kissed my son one last time before I handed his under seven-pound body over to the nurses, he smiled; I did not know if I would ever see him smile again. And, yet again, I drenched myself in my tears…

Miraculously we made it through surgery. The doctors, indeed, played music during surgery, and – since it was February 1992 and the winter Olympics were taking place in France – they shared with him who was winning the bronze, silver and gold medals in downhill skiing and figure skating. Five days later we went back home.

We’ve had lots of adventures since then; I can spot a doctor and peg his specialty with  95% accuracy, and have cried oceans of tears, some for joy, many out of grief.

Today Avichai lives in his own home with Keren, his wife of nine years, who also experiences Downs Syndrome. They are under the supervision of a group home and an off-site support “mom.” Aside from his regular work in a factory twice a month, Avichai is an assistant to Mayor, Shuki Ohana, of Tzfat, in Israel’s northern Galilee, where I and my husband, Yisroel, have resided for three decades.

If someone had told me then that my son with Downs would get through open-heart surgery, work alone and unaided, be fluent in two languages, live an hour away from me in his own apartment, together with his wife, and assist our Mayor – well, that was not written in any book on Down Syndrome.

I am so grateful for all the people along the way who directly or indirectly supported our son and our family. Winnie the Pooh was correct: “You are braver than you believe, stronger than you seem, and smarter than you think.”

Neshikha is reminding everyone that October is Down Syndrome Awareness Month. Neshikha supports and promotes inclusivity for special-needs people, awareness of the benefits of bees and other pollinators, and responsible environmental activism and protection.

END_OF_DOCUMENT_TOKEN_TO_BE_REPLACED

… it was the natural ingredients, the charming packaging, and overall wonderful feel and scents of the products themselves that make me a repeat customer. I especially love the sun balm- wonderful feel and you want to put it on face and body -- with no artificial anything. And the beehive candles are a wonderful gift.
... a small enterprise that completely rocked my world! I bought a re-usable food cover made of cloth infused with bee wax. Ideal for making a baggie for veggies, nuts, covering small bowls. Wraping my toothbrush and toothpaste together if I am traveling, wapping pens together in my pencil case etc etc. Using this gives me an alternative to cling film and plastic sandwitch bags and makes me feel good about myself and my relationship with the environment. IsraelScaVentures.com
I was really surprised when my 11 yr. old son asked specifically for MORE Neshikha lip balm. Our entire family loves the fantastic scents and uses them all the time.
“I’m reluctant to endorse this product widely because when you find something good you want to keep it secret and exclusively for yourself. But the altruistic side of me wins and I can unreservedly attest to the honey being WOW…The natural earthiness of the honey just caresses the taste buds …”
Neshikha lip balms go on smooth as silk. Refreshing, nourishing, healing scent combinations make me sing my heart out. https://tziona-achishena.com/
I’ve been loving using my Neshika Lipbalm over the last few months. The SpiriMint one is delightful and refreshing. I’ve used many natural-ingredient lip balms and I appreciate the high quality of Neshika’s ingredients. And I am happy to support a local business and a great cause.
I am a big fan of Neshikha lip balm — especially the RoseMiri Lavender. The feel, the scent, the delicious list of natural ingredients… When I use this excellent product, I know I’m treating myself with love.
For me the difference between your natural skin care and the commercial varieties is gourmet food to fast food. I love the way it smells, the way it feels on my skin, everything about it. I enjoy applying it because I feel like I’m putting something good on and into my body.
Scroll To Top Skip to content Sidebar
We use cookies to improve your experience on our website. By browsing this website, you agree to our use of cookies.
Accept