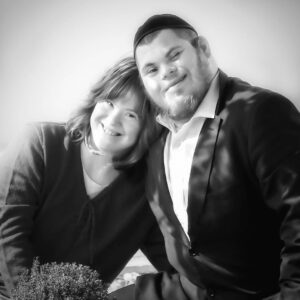 My presumptive life trajectory sharply changed three decades ago when I had my fifth child. I was in my early thirties, and, on paper, at least, my pregnancy was presumably normal: Normal hematocrit (blood iron levels), normal glucose and protein, normal Alfa-fetal protein test (a test indicating fetal abnormalities), normal ultrasound.

I’d planned for a home birth and was in the process of becoming a midwife. Being a mom helping women bring new life into the world seemed the perfect combination of my dreams and life goals.

But I had one of those mother glitches right after Avichai (Avi-hi) was born that very cold November afternoon in Fairbanks, Alaska; I noticed that his ears seemed a bit folded over.

Reaching for my very wanted baby, my first question was, “Is he ‘Down?’”

I’d had two consecutive miscarriages in between Avichai and his older brother, Daniel, so miscarriage was not new to me, nor the pain and loss. Saddened and scared, I tucked these feelings away deep within my heart. So, my prayer throughout the latest pregnancy was just for “a live baby.” I did not bargain with God for health or perfection; my miscarriage experiences made me very humble.

It took a week to figure out that, yes, our son had Down. His heart problems took a while to reveal themselves, and he did not have the typical simian crease on his palm like most babies with Down. He looked like us, so his almond-shaped, up-slanting eyes were not so obvious. That week was a present from God; we got to bond – first to our baby, not to the syndrome – and that made all the difference.

I think many parents who first hear they have a child who is differently-abled focus on the possible problems and don’t slow their thoughts down to the baby in front of them. The what-ifs can wreak havoc with your mind. Often, doctors feel they have an obligation to inform the parents of all the horrible things that could go wrong, first; it takes a bit of sensitivity to balance fact with hope.

In a world where early genetic testing is giving some parents the option of aborting the unborn with Down, it is even more important to balance the truth. Would you encourage someone to abort a child who may become a model, an actor, a husband, or a wife?

Every now and then there are videos with individuals who experience Down doing fantastic things like “Dear Future Mom” and 50Mums|50 kids|1 Extra Chromosome. They are very encouraging but are not shown in countries like Iceland or France; there, policies encourage abortion of Down Syndrome unborns. However, you don’t hear so much of other differently-abled individuals having to justify their existence. Someday there will be a prenatal test for visual impairment or hearing problems – will that justify a new batch of aborted fetuses?

Our precious baby was going to need open-heart surgery and they could not do it in Alaska. The pediatric cardiologist only came once a month. He prescribed medicine that had to be given precisely in two doses, twelve hours apart, and this was the pre-cellphone era where you couldn’t just set your alarm. When we traveled I put the bottle in my front shirt pocket under my parka so it wouldn’t freeze.

Getting through open-heart surgery, getting our son fat enough, and keeping him healthy was our goal; the Downs Syndrome issues became secondary. I remember holding him next to me the night before surgery not knowing if our barely seven-pound, three-month-old child was going to make it. But he did – and how:

Today, Avichai is employed in a factory and comes to Safed twice a month as an aide to the Mayor. He’s married almost a decade to his lovely wife, Keren, (who also experiences Down’s, and who is employed as a preschool aide). They live in their apartment in Rekhasim, a city near Haifa in northern Israel, under the supervision of the Tzohar Halev group home.

Everyone accepts life’s challenges differently. If you are facing a child needing medical intervention, it’s encouraging to know that most procedures are far more advanced than they were thirty years ago. Some of the best advice I received through the years came from parents who were a bit farther down that uncharted river. May people like them come your way when you need them.

Celebrate even small milestones and don’t take anything for granted. Talk to someone about the difficulties as well as the triumphs. We are not alone. According to African wisdom, “it takes a whole village to raise a child.” 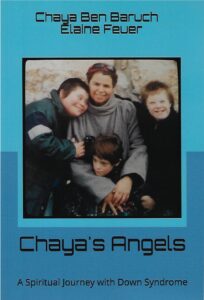 Looking back, I truly believe the A.A. Milne quote from Winnie the Pooh: