Perspectives on thriving with Downs 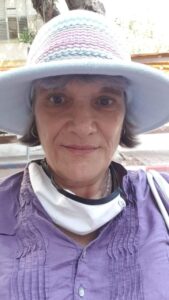 Chana Siegel, a nurse at the Shalva Center in Jerusalem, Israel (Courtesy)

Marking international Downs Syndrome Awareness Month, a pediatric nurse at the Shalva Israel Association for the Care and Inclusion of Persons with Disabilities says that “societal attitudes towards Downs are more positive nowadays than in the past.”

Philadelphia-born Chana Siegel, an RN who is a part of an afternoon activities program at the recently-inaugurated, well-appointed center, feels, “this current generation of ‘Downies’ in their 20s and 30s were generally born to families who ‘decided’ to keep them.”

In a recent IM chat with Neshikha, she noted remarks by a veteran educational advisor at Shalva, who believes “These are not the same kinds of kids we used to get. They used to be sad and weak, now they have confidence and so do their parents.’”

In Siegel’s view, “in the world of special needs with lower IQs, the societal view of such individuals as children and adults has changed for the better. Most particularly, Down Syndrome individuals, because their specific genetic problem is more generally identifiable, are the focus of positive attention, perhaps because some of their characteristics include high social sensitivity, friendliness, and loving natures.”

In a related conversation, Neshikha co-founder, Chaya Ben-Baruch, speaking of her own life experiences as a mother of adopted Downs children, recently wrote that, while “their biological parents chose to give them up for adoption because they had Downs, we got to hug them, to love them, and yes – to nurture them when they fell ill. We got to see, support, and experience their lives beyond their ‘disability.””

Ben-Baruch, referring to common misconceptions of family life with Down children and adults, said, “You hear terms like ‘suffering,'”  yet points to a National Institutes of Health article by Dr. Brian Skotko et al., which revealed that a very high percentage of individuals who experience Downs are happy with their lives:

Ben-Baruch, whose grown and married Down children live largely on their own within a supervised village, questions “when someone chooses to terminate a baby because he has Downs, what does that say about my child? How would that person accept and treat my child? Where is that person’s ‘humanity? Would they view them as a burden or drain on society?”

Ben-Baruch notes that “when you have a sibling who is differently-abled you may view the world very differently than a sibling whose parent chose to terminate them as ‘less than perfect.'”

Siegel, who made aliyah (emigrated) to Israel from Winston-Salem, North Carolina, has resided and raised a family in Israel over the last four decades. Recalling growing up in the States, she concurs with Ben-Baruch: “I babysat a lot. When I was about 12, I began a lifelong relationship with Chip and Peggy Mims and their children, who included Jade, who had multiple genetic problems. Jade lived at home, and Chip and Peggy were very matter-of-fact and accepting of her in their lives, and, as their regular babysitter, this became my attitude as well.”

Seigel, who had previous experience as a school nurse at the city’s noted Feuerstein Institute educational center, and received her RN in Nursing & Pediatric Nursing at the Hebrew University of Jerusalem, said she’d worked with “many of the same kids I had dealt with too briefly at Hadassah [Medical Center]. Shalva had just moved to their fabulous new facility [in 2019], and anybody who has worked with special needs people is just taken aback by the color, the scope, and the abundance of Shalva.”

She runs the center’s afternoon program for school-age kids, from age 6 to 21. “Our job is to provide a safe and active space for them to learn and to have fun, while the parents know they are protected and happy.” 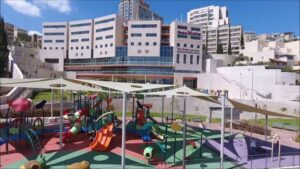 Seigel began to see “how much Shalva was about supporting families,” and continued, “parents who have spent the first month of their baby’s life in which their child is diagnosed and fretted over, can come to the Mommy and Me program for Down families. Mother and baby get involved in early intervention physiotherapy and occupational therapy, which significantly boosts the child’s future development level, and gives parents the tools to strengthen their child. They also discover that they are not alone and that their baby is just as lovable and delightful as any other baby. They see the interactive atmosphere at Shalva daycare and hear the results of the motor and cognitive work with the kids at Shalva kindergarten, who become chatty and communicative as any others.”

In her experience, “most families – given information, resources, and a bit of breathing space – manage quite well. One thing Shalva does that no place else does is to bring these kids and these young adults into the wider community. We have groups from workplaces who come and sponsor an activity afternoon with the kids. They meet the kids and everyone has fun together. Outsiders go home glowing. They had a great time doing something good.”

And they get out on field trips as much as possible – despite varying Covid restrictions.

“Before Covid, we would take a lot of field trips, and finally, this summer, we went out again to the Palmachim Israel Air Force base. The soldiers and our kids got together in a big hangar where everyone was treated to burgers and cold drinks, and the kids got to climb into a model Apache helicopter. The older ones went to a demonstration of how the crews maintain and repair the planes, and try out some of the tools. 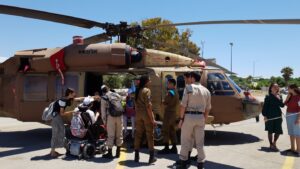 “You know how hard these soldiers work, and how much of their job is unappreciated. The Shalva kids treated each and every one of them like Superman: ‘Thank you for keeping us safe!’ one exclaimed to her uniformed host.”

At one point during the festive outing, “airbase personnel were dancing along with the kids. Many of them came up to us saying what a wonderful experience it had been, and how they wanted to come and visit. Israelis are big-hearted sentimental folks with a sweet spot for kids, and Shalva is a venue that lets this happen.”

Summing up, Ben-Baruch concluded, “Our children need and give love; they need to be valued and educated just like any other person.

“A Downs Syndrome baby can develop into a productive, sharing, loving, member of any society; they value others and often inspire and educate those around them. And, yes, sometimes they need help, but sometimes, so do I, and so do you; we all struggle to survive some of life’s tougher challenges – but, only together, can we fully thrive.”

END_OF_DOCUMENT_TOKEN_TO_BE_REPLACED

… it was the natural ingredients, the charming packaging, and overall wonderful feel and scents of the products themselves that make me a repeat customer. I especially love the sun balm- wonderful feel and you want to put it on face and body -- with no artificial anything. And the beehive candles are a wonderful gift.
... a small enterprise that completely rocked my world! I bought a re-usable food cover made of cloth infused with bee wax. Ideal for making a baggie for veggies, nuts, covering small bowls. Wraping my toothbrush and toothpaste together if I am traveling, wapping pens together in my pencil case etc etc. Using this gives me an alternative to cling film and plastic sandwitch bags and makes me feel good about myself and my relationship with the environment. IsraelScaVentures.com
I was really surprised when my 11 yr. old son asked specifically for MORE Neshikha lip balm. Our entire family loves the fantastic scents and uses them all the time.
“I’m reluctant to endorse this product widely because when you find something good you want to keep it secret and exclusively for yourself. But the altruistic side of me wins and I can unreservedly attest to the honey being WOW…The natural earthiness of the honey just caresses the taste buds …”
Neshikha lip balms go on smooth as silk. Refreshing, nourishing, healing scent combinations make me sing my heart out. https://tziona-achishena.com/
I’ve been loving using my Neshika Lipbalm over the last few months. The SpiriMint one is delightful and refreshing. I’ve used many natural-ingredient lip balms and I appreciate the high quality of Neshika’s ingredients. And I am happy to support a local business and a great cause.
I am a big fan of Neshikha lip balm — especially the RoseMiri Lavender. The feel, the scent, the delicious list of natural ingredients… When I use this excellent product, I know I’m treating myself with love.
For me the difference between your natural skin care and the commercial varieties is gourmet food to fast food. I love the way it smells, the way it feels on my skin, everything about it. I enjoy applying it because I feel like I’m putting something good on and into my body.
Scroll To Top Skip to content Sidebar
We use cookies to improve your experience on our website. By browsing this website, you agree to our use of cookies.
Accept