A Beautiful Blond: Downs and Victoria’s Secret
By Chaya Ben-Baruch

I am used to seeing beautiful models, they come in an assortment of eyes shapes, hair color, and skin tones. Korean actress Jung Ho-Yeon in the Netflix series “Squid Games” was only the second Asian model featured solo on the February 2022 cover of Vogue in 130 years.

“If there is a Korean word to describe Jung Ho-Yeon it is ‘Yoel-shim’ which means “To work hard, to put your heart and soul into everything,” Vogue gushed. 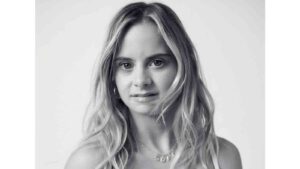 Later this month Victoria’s Secret added 18 dynamic women from myriad backgrounds – including 24-year-old model Sofia Jirau, who was born with Down Syndrome.

““One day I dreamt it, I worked at it and today it’s a dream come true,’ Jirau wrote on her Instagram page – one of the few models with Down Syndrome to appear during New York Fashion Week. It’s worth noting that Victoria’s Secret did not have a great track record for inclusion in the past. Today, they are trying to celebrate “all women.” But, until recently, only those “perfect” svelte, tanned, slim bodies were all that brand was known for – and was proud of.”

So I am glad that Victoria’s Secret is trying to change its image; women and differently-abled people are so much more than their bodies.

Miriam Blanco is another Victoria’s Secrets model with disabilities. She is often in a wheelchair but was featured with crutches. Diverse and inclusive advertising can make one think deeper. In 2019 the White-Bridal-Boutique in Portishead, England had a mannequin displayed in a wheelchair wearing a beautiful bridal gown.

Jirau is not the only model who has Down. Harry Britton, a 17-year-old with Down models for River Island apparel with the slogan “Do Expect Greatness.” As well, 20-year-old Nino Genua and cute Sheridan Lindsey worked for Nordstrom. And the list goes on. They range from infants to adults, like any group of models; from various countries, races, and nationalities.

Children with Down will likely struggle with something related to their diagnosis during their lifetime. But a child is so much more than a diagnosis. And although no parent wants their child to suffer, adversity can make us stronger, more resilient, and tolerant of others. When a child with Downs Syndrome learns to walk they are like a bird trying to keep up with the rest of the flock, with a less than perfect wing.

So, yes, it takes more time; different muscles have to get stronger to compensate for the lack of muscle tone, and when they do walk, run, or gracefully dance, it has taken them more effort than a “typical” child. It takes more “Yoel-shim,” to quote Vogue.

As the mother of five children with Down Syndrome, I can tell you something that Vogue missed: in my opinion, some of the most beautiful people in the world have “Mongoloidian eyes” and their beauty is more than just looks.

Thirty years ago when our biological son with Down was born children like him were being locked away in institutions. Parents were told these children should be forgotten or they would ruin their siblings’ lives. Some EU countries now even want to “eradicate” Downs Syndrome fetuses via abortion

But does it really look like these models are suffering? Differently-abled individuals so often seem to have to – unfairly – justify their existence to the world-at-large.

So, personally speaking, I am thrilled about Sofia and Miriam’s successes. I am glad it is hitting the news and countries are not “hiding” people who have Down so as not to “offend” those who chose to abort any baby not seemingly “perfect.”

I hope it will also make medical personnel think twice when a new baby with Down is born. Instead of telling a new parent, “Well she may be able to work at McDonald’s,” they may soon add “She is so beautiful, she may someday get to model for Victoria’s Secret.”

Who knows – maybe in another 20 years, individuals with Down Syndrome can become doctors, or whatever else they want to be – but they need to first be born and not eliminated before they take their first breath.

At the luncheon, the entertainment was a fashion show with models using children who had special needs. At the time, I held our five-month-old son, not knowing what his future would be, but that fashion show actually gave me hope.

My daughters Kirin and Shalhevet are our models for Neshikha. Being a model for Victoria’s Secret is not one of their life goals, but if it were I would hope that I could ethically support them. My father would give you his best advice even if did not agree with your choices. Lucky for him the worst thing I did was move to Alaska.

I am pleased that Victoria’s Secret is trying to change its image. People, women or men, differently-abled or typical, are so much more than their bodies. We should follow our dreams with all our Yoel-shim.